This book is a collection of wisdoms and short sermons by the Commander of the Faithful Ali bin Abi Talib (peace be upon him) gathered by Sheikh Abu Al-Fath Abd Al-Wahid bin Muhammad Al-Amidi (d.510 AH).

The reason behind choosing this topic was the researcher’s interest and desire for the field of application to be a solid text that is big deal. She found that the book (Gharr Al-Hekm and Dorar Al-Kalim) is the appropriate book for the field of research, so how can it not when it includes between its two covers speech of the master of rhetoricians and the Bab Medinat Al- Elim of the Messenger of Allah (peace be upon him and his family) and the first founder of syntax.

The thesis aimed to study the syntactic aspect of the speech of the Commander of the Faithful, and to clarify the technique of his high rhetorical use in its syntactic dimension.

The researcher’s focus is on the overall syntactic structure from the function that the sentence and its attachments perform in constructing the meaning, directing, on semantic basis which makes structure the widest level to reveal the aesthetic and semantic value of the speaker’s intentions. This contributes – to a small extent – in revealing an aspect of the semantic and rhetorical enrichment in speech  Commander of the Faithful (peace be upon him).

The thesis included an introduction, three chapters, and a conclusion to the findings of the research.

As for the introduction, the researcher dealt with the concept of syntactic structure and its relationship with sentence among the ancients and modernists. She showed the positions of difference and convergence in their view of the sentence and its relation to speech, with a brief overview that translates into the life of Sheikh Al-Amadi (may Allah blessed him).

The first chapter is attend to study declarative sentence within two sections. The first one includes the study of the nominal sentence and its patterns related to the multiplicity of forms of the subject and the predicate. The second section met the verbal sentence  and its variations, forms and structures. 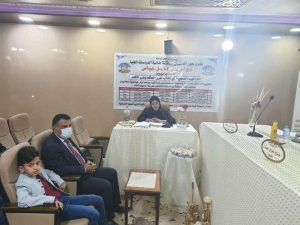 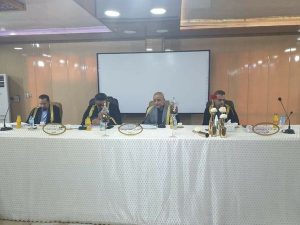