A master’s thesis in the college of Engineering at the University of Misan discussed the nonlinear analysis of non-prismatic concrete thresholds using the theory of specific elements.

The thesis presented by the student (Ali Wathiq Abdul Ghani) included theoretical investigations of the bending behaviour and cutting of 43 thresholds of non-porous thresholds armed with or without openings for concrete with normal resistance and high-resistance simple backing and under static loads. In addition, the reinforcement was used by carbon fibre Polymeric CFRP Sheet for seven concrete thresholds.

The study examined several variables on this type of thresholds, including changing the angle of inclination with the horizon, increasing compression resistance, the presence of transverse openings, the presence of longitudinal openings, and the use of polymeric carbon fibre to strengthen the thresholds and to address the shortage due to the presence of the aperture. 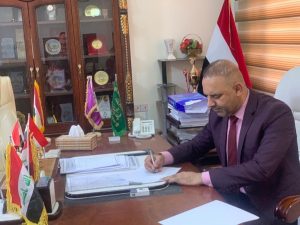